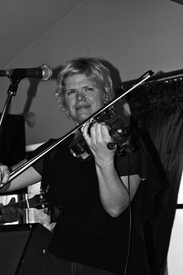 Natalie Walker
Natalie is an accomplished fiddle player who has traveled across North America playing her fiddle since she was only 4 years old! She draws much of her inspiration from the time she spent in Cape Breton and the many fiddle players she learned from out there! Her repertoire includes a variety of fiddle styles including Celtic, Bluegrass, Swing, and much more. She was raised on country music - real country music - and spent many nights listening to her grandma sing Patsy Cline in the Rec Hall at Buck Lake Cottages. More recently she traveled to Kentucky to play some good down home country music with her many music friends in the south! Lately Natalie has begun to play the mandolin and picks it up for the occasional song or two in their performances. 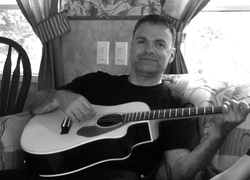 Dave DiMarco
Dave has been playing guitar, drums, and bass since he can remember! He only more recently has found a love of Celtic music but by the way he plays you might think he was born in Ireland! His musical background is extensive as he is a proficient and talented drummer, bass and guitar player, and can even be coerced into singing the occasional song. The rhythmic acoustic guitar he provides as back up makes it hard to believe their are only 3 people on stage!
Sam DiMarco
Sam credits much of his musical ability to his dad and fellow band member Dave! Sam learned the drums from his dad at a young age and more recently picked up playing the guitar. He joined Fiddlin' Around in Sept. 2018 and has been playing with them full time since then. Sometimes, Sam & Dave switch instruments and Dave sits back on the drums while Sam plays guitar. This is his first experience with Celtic music but he has quickly learned the songs and his steady beat really adds a full sound to the group.

As a Group
Natalie and Dave have been playing together for several years in different bands but Fiddlin' Around has become their new passion. It's hard to sit still when Fiddlin' Around is playing! Son Sam has recently joined them on the drum kit adding a steady and full beat! Also, bodhran player Dave Gomez sometimes joins them on gigs and adds a little bit of a kick with the rumble of the bodhran. Whether at a festival, party, or local pub their toe-tappin' tunes please people of all ages around the Niagara Region! You can hear the melodic sounds of the fiddle & guitar, and sweet harmonies most weekends at The Irish Harp Pub in Niagara on the Lake. Their music fits many different occasions - whether it's on a big stage or around your kitchen table - you can't help but smile and dance with their Celtic and Down East songs. They have made many fans and friends through their musical adventures and look forward to playing for you!
Proudly powered by Weebly